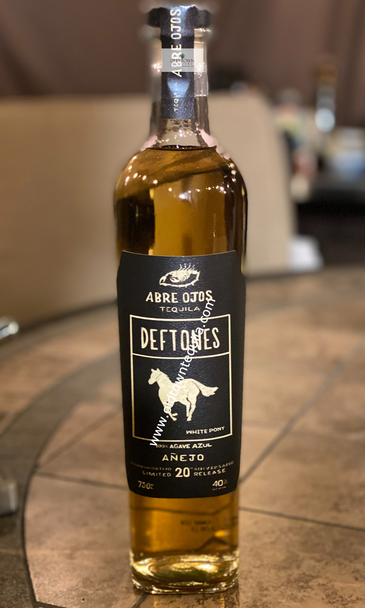 To celebrate the 20th anniversary of their legendary RIAA Certified Platinum album White Pony, GRAMMY® Award winning band Deftones has partnered with Abre Ojos Tequila to release a limited-edition Añejo Tequila. Abre Ojos is proud to commemorate the legacy of Deftones and the impact of White Pony on the music landscape and culture. Deftones released its ninth album, Ohms, to widespread critical acclaim, and on December 11th they released Black Stallion: the long awaited White Pony companion album featuring an eclectic cast of contributors re-imagining its songs and their far-reaching impact across the worlds of metal, hip-hop, indie, and electronic music.

The limited-edition Añejo was handcrafted in the town of Tequila, Jalisco. It is aged up to two years in American Oak used whiskey barrels creating caramel, vanilla, hazelnut and chocolate notes. The buttery taste ends with a smoky, mature flavor. It is meant to sip and enjoy.

MSRP:
Now: $79.99
Was:
This limited-edition silver tequila was made from Weber Blue Agave cultivated on the grounds of the Hacienda Patrón distillery in Atotonilco el Alto, Mexico. This special terroir gives the...

MSRP: $49.99
Now: $43.99
Was:
Distiller Notes on Hendrick's Orbium Limited Release Gin It is what Hendrick's might taste like in a parallel universe.  Orbium is a reimagining of Hendrick's Gin by our Master Distiller,...

MSRP:
Now: $73.99
Was:
One of the best Anejo in the market.Here is where our blue agaves grow for seven to eight years, caressed with the warmth of the Mexican sun, nourished by the summer rains, and protected from the...