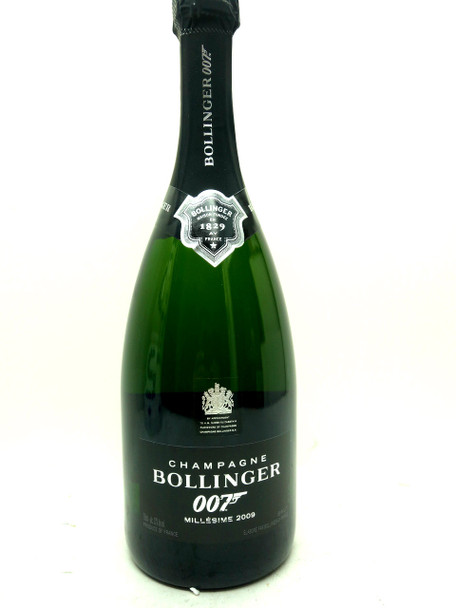 Sourced exclusively from Grands crus from the Champagne region, the juices selected are taken from the ‘cuvée’ retaining only the best of the grapes. The «Bollinger Spectre Limited Edition » blend is composed of 68% Pinot Noir and 32% Chardonnay.
Five crus make up the composition of this blend
For Pinot Noir; Aÿ 39% and Verzenay 29%.
For Chardonnay; Mesnil-sur-Oger 16%, Avize 8% and Cramant 8%.
«Bollinger Spectre Limited Edition» is produced in small old oak barrels so as not to give the wines the taste of wood or tannins. After bottling, the second fermentation and slow maturing in the cellar occur using cork stoppers to preserve the freshness of the wines while protecting them against oxidation.
Maturing & Dosage
A maturing period in the cellar twice as long as stipulated in the Appellation rules.
A moderate dosage of 7 grams per litre.
The 2009 harvest
Favourable weather conditions allowed the vines to bud mid-April, slightly early compared to the average of the past ten years. Flowering was disrupted by rain and cool temperatures Early summer was marked by a succession of violent storms that raised concerns of vine health. As of 1st August, there was uninterrupted excellent weather until the harvest, which ran from 12 to 27 September with idyllic temperatures. The average potential alcohol for Bollinger reached 10,1°, with an acidity of 7 grams per liter.
View AllClose

MSRP:
Now: $29.98
Was:
Bogart's Gin 45% Alcohol. 750 mL Incredibly smooth and complex Juniper forward with Spruce tips and a crisp cilantro taste that finishes in a round full back note of macadamia and peppery lime...

MSRP:
Now: $38.99
Was:
Bowen's Handcrafted American Whiskey 45% Alcohol, 90 Proof. 750 mL Product of California USA FROM THE MAKER : “Old Bud” was a fifth-generation moonshiner dating back to the American...