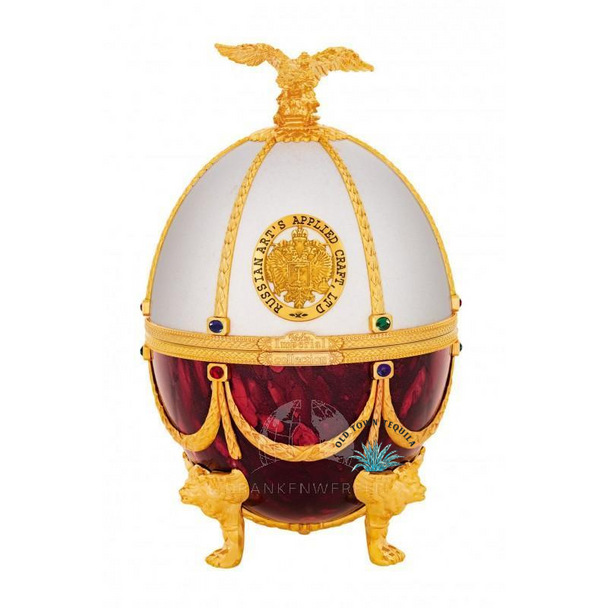 The Russian liquor producer Ladoga Group has found an interesting niche for selling its Imperial vodka, offering the clear spirit in an excessively-ornamented, Fabergé egg-influenced packaging that’s large enough not only to contain 750 milliliter’s worth of the aforementioned vodka, but also four glasses cut from Venetian glass. The egg is made of metal alloy featuring 24-carat gold gilding and colored crystal flourishes, probably just go be tasteful. Meanwhile, the 12-times-distilled vodka produced with water from Europe’s largest freshwater lake, Ladoga Lake, and Russian wheat and rye is based off a recipe that was supposedly originally created in 1721 for the Russian Tsar Peter the Great.

MSRP:
Now: $0.00
Was:
Produced exclusively from the finest wheat of a single harvest As a result, Kauffman is the world's only vintage vodka Fourteen times distilled, the world's smoothest vodka Twice filtered through...

MSRP:
Now: $65.99
Was:
Carbonadi Ultra Premium Italian Vodka 750ml  One of the newest, smoothest, ultra-premium vodkas, originates from a small, family-owned distillery in this same region.

MSRP:
Now: $399.00
Was:
Tequila Mandala Extra Anejo Chaquira Art Limited Edition ONE LITER Gorgeous chaquira art bottle.  Every bead is hand applied to each bottle by wax, so each bottle with be unique with slightly...

MSRP:
Now: $299.99
Was: $324.99
The first release from Champagne Armand de Brignac, the Brut Gold remains the most iconic cuvée in the range. Rich with the old-world tradition of champagne blending, it is a trio of vintages...

MSRP:
Now: $1,449.00
Was: $1,550.00
Cincoro Extra Anejo Tequila is a blend of reserve barrels specially selected for their individual attributes, then blended together into a symphony of layered flavors that have the complexities...