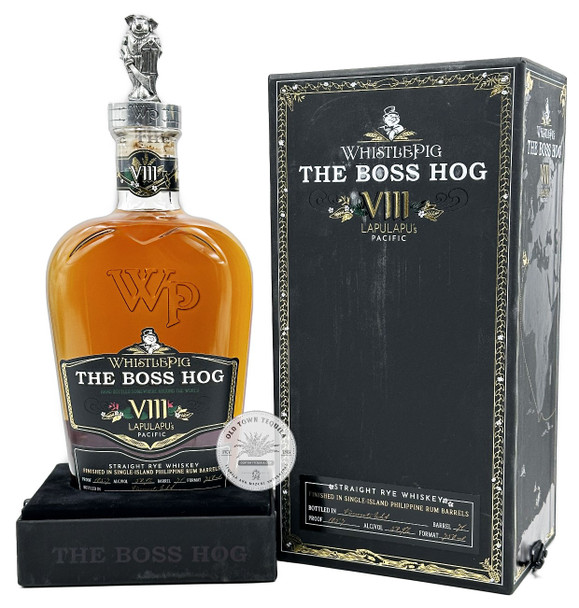 An epic sequel to the World’s Best Rye, The Boss Hog VIII: LapuLapu’s Pacific completes our journey around the world, unfurling a chronicle as rich and bold as the whiskey itself.

Upon crossing the Pacific, Captain Magellan met his fate at the hands of the legendary Filipino warrior LapuLapu. A fierce and vociferous defender of independence, LapuLapu led his island home against the Spaniards. There he forged a successful fortification, staving off colonial occupation for more than forty years.

WhistlePig The Boss Hog Vth Edition: "The Spirit of Mauve"

MSRP:
Now: $1,299.99
Was:
Whistlepig The Boss Hog The Samurai Scientist 750ml On the rare occasion that Dave Pickerell’s five promises are realized, we release a whiskey that epitomizes WhistlePig’s odyssey to...

MSRP:
Now: $25.00
Was: $40.00
***Please specify which bottles to be engraved in order notes, make sure to add the correct quantity for orders with multiple products*** An engraved bottle makes for a unique and thoughtful gift...

MSRP:
Now: $69.99
Was:
Benriach Smoke Season Single Malt Scotch Whisky 750Ml Smoky whiskies are not traditionally associated with Speyside, but look back through its distilleries’ archives and it’s clear that...

MSRP:
Now: $79.99
Was:
Camus Small Batch Port Cask Finish Cognac 750ml A fruity VS Cognac from Camus that has been finished in ex-Port casks, creating layers of plums, raisin, peach and raspberry throughout the palate...

MSRP:
Now: $209.99
Was:
Camus XO Intensely Aromatic Cognac 750ml Camus XO is the result of a careful selection of the best eaux-de-vie which matured for at least 10 years and took place in small oak casks. The use of...